A young and brilliant Nigerian Lady who goes by the name Chinyere Amanze has made Nigeria proud after graduating from the prestigious Harvard Law School, Cambridge, Massachusetts, United States.

Chinyere celebrated her achievement on her Linkedin with one of the most notable black women in the United States – Judge Ketanji Brown Jackson.

Judge Ketanji Brown Jackson is the first-ever black woman that will sit as a Judge of the United States Supreme Court, breaking a 233-year-old record in the country. Sharing her success on her page, Chinyere noted that she was honoured by meeting the Judge on her graduation day.

Chinyere attended The Bryn Mawr School, Baltimore, Maryland for her elementary and high school. She proceeded to the Duke University, Durham, North Carolina where she bagged a Bachelor of Art in International Comparative Studies and Markets and Management.

After her Bachelor’s Degree at Duke University, Chinyere proceeded to Harvard Law School where she bagged her Doctor of Law (JD).

“I could not be more excited about my future as an attorney,” she said. 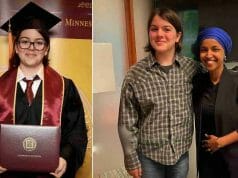