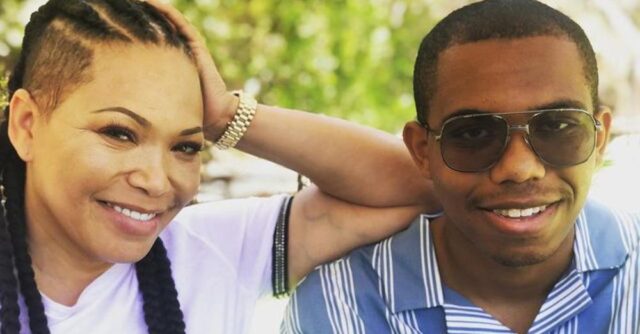 Tisha Campbell is having a “proud mom” moment. The actress recently talked with Hot 97’s Ebro In The Morning discussing everything from the Martin reunion to her putting herself first after finalizing her divorce from Duane Martin. During the interview, Tisha took a moment as any proud mother would brag about how independent her children are despite their mother being a celebrity with the means to support their dreams.

Tisha Campbell’s star began to elevate even higher in the 90s after enjoying much success in the 80s. The actress held a memorable and pivotal role in Little Shop of Horrors, along with the “Spike Lee Joint” School Daze. She was also part of the main cast on NBC’s musical-comedy, Rags to Riches. Then at the start of the 90s, it was evident Tisha Campbell’s star was even more on the rise. She starred in the cult-classic film House Party and its two follow-up sequels. Campbell also co-starred alongside comedian Eddie Murphy in two films, Another 48 Hrs. and Boomerang.

Tisha Campbell is perhaps best known for her role as “Gina Waters” on the television show Martin. The actress worked alongside her House Party co-star Martin Lawrence for most of the series’s five seasons. In 1991, one year before working on Martin, Tisha Campbell met comedian and actor Duane Martin. The two began to date, and in 1996, they joined together as husband and wife. Together, they have two children. Their first son, Xen Martin, was born in 2001, followed by another son, Ezekial Martin, in 2009.

But 27 years after the pair fell in love and after 21 years of marriage, Tisha Campbell and Duane Martin announced their split. Their divorce was finalized in December of 2020. According to PEOPLE, both parties decided to split all expenses for Ezekial, as he was still underage. They also have joint custody. Following their split, multiple news sources began reporting their financial woes. A Daily Mail report detailed that the couple was in the thick of millions of dollars in debt while having to file for bankruptcy. Tisha Campbell also revealed that she was left with $7 to her name after their divorce.

Concerning Tisha Campbell’s eldest son with her ex-husband, Xen Martin, he was diagnosed with autism by the age of two. However, despite the challenges of the disorder, Xen Martin has been making remarkable strides in his life. Tisha Campbell has been an advocate of autism awareness ever since she discovered her son’s diagnosis. She told Essence in a 2013 interview that although he was mainly “non-verbal” as a child, his speech began to develop over the years. At 12 years old, Campbell detailed that he had a girlfriend and that they were now unable to “shut him up.”

In 2020, the actress blissfully shared that her son was accepted into the college of his dreams. Detailing that Xen has always had a knack for having his own sense of independence, Campbell praised him for his achievements on Instagram. “He didn’t wait for anyone to help him. He didn’t wait for us to help him,” Campbell said. In addition, she shared his dreams of being an animal conservationist. Tisha Campbell continued, “He has stayed on the Dean’s List, and is holding down two jobs because he wants to be independent of a silver spoon.” Also, in January 2021, Tisha Campbell took to Instagram to share that Xen aced his public speaking class. “My baby, who doctors said may not EVER talk!!! That’s MY BABY,” she beamed.

During her recent interview with Ebro In The Morning, Tisha Campbell shared that he’s now 21 years old and still pursuing his dreams. “He’s super dope, and he’s got 2 jobs too,” stressed the actress as she smiled. Calling his jobs “humbling,” Campbell shared that Xen shows her that he would instead work to provide for himself. “They really do see how hard I work and how much I think of them, so they think of me at the same time,” expressed the Uncoupled actress. Tisha Campbell dived into her past work to ensure that Xen would grow to be independent, something she says he can now accomplish. “Something just clicked with him, and he’s just an amazing human being,” said the actress.

According to Celebrity Net Worth, Tisha Campbell has an estimated net worth of $500,000.