Home Lifestyle If You See A Pickle Ornament Hanging From Someone’s Tree This Christmas,...

Pickled cucumbers are often used as condiments for hamburgers and hot dogs, or as crunchy jumbo-sized snacks. They’re supposed to be food, but in some parts of the world, they’re used as DIY Christmas tree ornaments! Believe it or not, this trend is slowly starting to spread across the entire country.

Of course, Christmas trees are no stranger to having its branches layered with foodstuffs – they’ve been known to play dress-up with candy canes and fake cookies. But, those sweets are much more pleasing to the eye than a bumpy green gherkin! So, why in the world would anyone want to trim their tree with an ugly pickle, when there are so many cuter options out there? 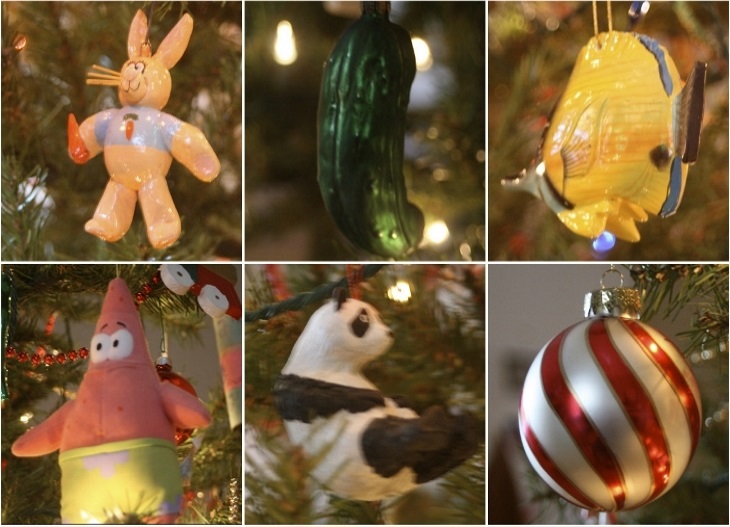 Well, thankfully it’s not a real cucumber that adorns the tree, at least not now. And, maybe not even way back when either. These days, people use pickle-shaped ornaments that are made of glass, but it’s not the material that matters – it’s the meaning behind it that holds the real magic.

As the old-timey tradition goes, you’re supposed to hide a pickle ornament somewhere within the depths of the tree branches. Then, according to Christmas tree pickle lore, the first person to find it will get an extra treat or present. In another version of the legend, the fastest pickle picker will be blessed with an entire year of good luck! 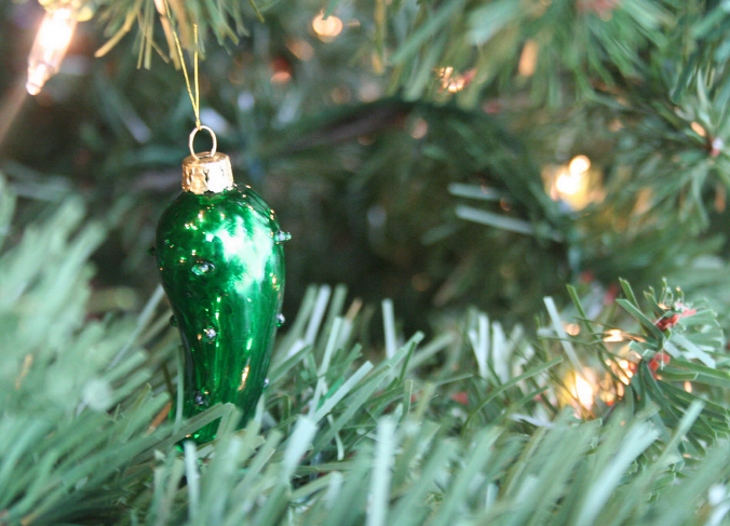 It’s been reported that the Christmas pickle tradition started in Germany, but if you ask a German-born and bred citizen about it, all you’ll get is a blank stare. After much research, it’s now actually thought to be an American tradition, which was brought to us by commercial interests in the late 19th century.

In the 1890’s, Woolworth’s department store imported Christmas tree decorations, including pickle ornaments, from Germany. After they marketed their shiny new wares, people began to buy the unusually-shaped tree trimmings in droves.

Year after year, these imported pickles became a permanent fixture on everyone’s Christmas trees, and people began to associate Germany with the good luck story. This is one explanation for where the mistaken German origin theory came from, but there are a few other variations out there, too.

The origins of the good luck story are rather murky, but it may have started back in the American Civil War days. According to Wikipedia, a Bavarian-American Union soldier by the name of Private John C. Lower was captured by enemies in the Confederate Army. He was given very few rations and was starving by the time the holidays rolled around.

On Christmas Eve, the down-and-out soldier begged his captor for any kind of food, even a sour pickle. The guard felt sorry for the poor bloke, and since he was in the Christmas spirit, he tossed his captive a little present.

After the war was over and the soldier returned home, he credited the humble pickle with saving his life. Every year after that, his family hid a pickle in the Christmas tree as a way to honor the good-luck charm that kept him alive. 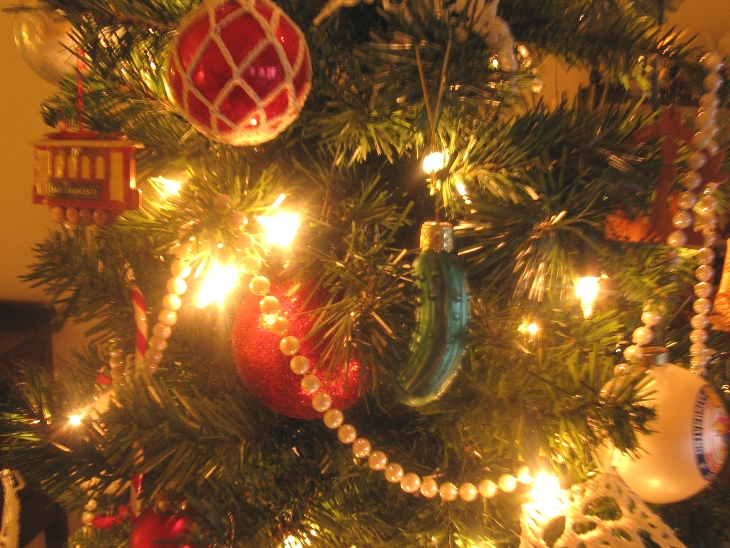 In the last version of this unusual pickle trilogy, it was actually Saint Nicholas who started it all. This historic Christian saint was the Bishop of Myra in what is now Turkey. When he heard that an evil shopkeeper had snatched three small boys and stuffed them into a pickle barrel, he quickly prayed for their release. Because his faith was so pure, the prayers were answered. When St. Nick looked inside the barrel, the boys were safe and sound.

I had no idea about any of this! Did you? Ultimately, it’s hard to pinpoint how the pickle ornament tradition started – it’s surrounded by commercialism, mysticism, and magic. The real question is – are you going to be hiding a shiny glass pickle in your Christmas tree this year?