Home Lifestyle Inspire How a Lost Purse Got a Heroin Addict on the Path to... 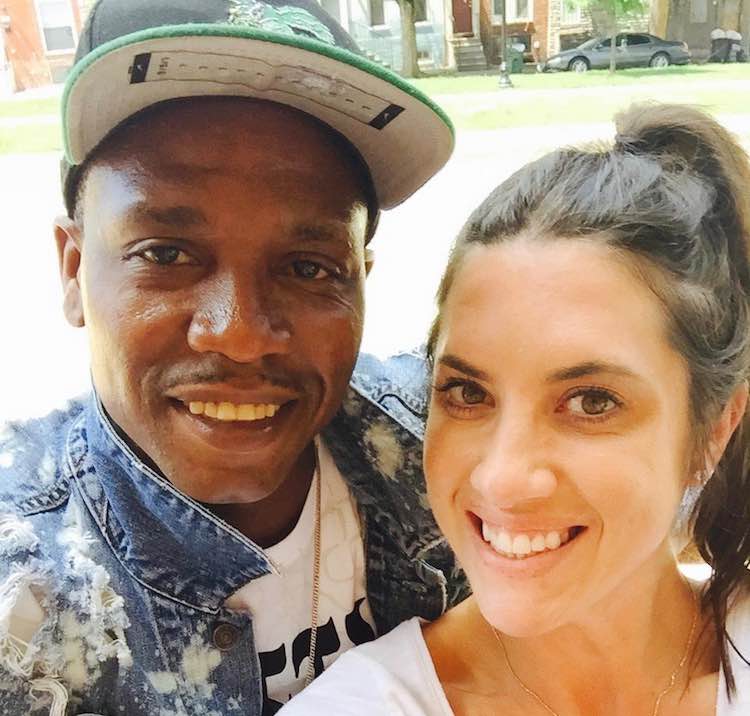 Aeric McCoy was a heroin addict living on the streets of Baltimore when he found Kaitlyn Smith’s abandoned purse in an alley back in July. Little did he know, that purse would become his key to recovery.

When he found the expensive purse in “an unsavory part of town”, he found a wallet, several receipts, utility bills, and notes belonging to someone named Kaitlyn. Though the cash and credit cards were all gone, he was spurred to try and return the purse to the original owner.

After locating her address on one of the electric bills, Aeric then began a long, arduous journey to Kaitlyn’s neighborhood. He was kicked out of stores when he tried asking for directions and he had to sell his bus pass in exchange for a subway ticket.

Meanwhile, Kaitlyn had already assumed that her purse was long gone when she saw Aeric walking through her neighborhood.

“My roommate and I were walking down our street to a friend’s surprise party when I saw a man in a tattered, dirty white t-shirt and jeans hustling toward us, head down… carrying my purse!” says Kaitlyn.

“I offered the man money to buy it, which he politely declined and insisted he had to return it to a lady named Kaitlyn, who lived up the street. I told him I was that lady, and he melted down, exhausted, saying he found it in an alley near Upton Market.”

“He told me … he wanted to return my purse because someone had recently stolen his sleeping bag from the abandoned house where he was staying and he could only imagine my frustration as he had felt the same way.”

Touched by Aeric’s kindness, Kaitlyn and her friend gave him clothes, a flashlight, a new sleeping bag, a backpack, and a ride home.

It was on this drive that Aeric told his new acquaintance about how he was a drug user. He also explained how he used to run a lucrative landscaping business until an accident left him unable to work three years ago. The painkillers, combined with his loss of income, led him down the slippery slope to addiction.

Despite the hardships, Aeric spoke of how badly he wanted to get clean and how he one day hoped to attend a recovery facility in Fort Myers, Florida for treatment.

Kaitlyn gave Aeric her number and said that – in gratitude for returning her purse – she would be more than happy to pay for his plane ticket south if he ever decided to go.

“Several days later, on a borrowed phone, he called to say he had contacted the rehab facility in Florida and they had a space for him if he could get there. I called the facility to verify what Aeric told me and intake confirmed that they were prepared to pick him up from the airport and begin treatment if Aeric could get there.”

Fast forward several months and Aeric is about to celebrate 100 days sober.

Using the $12,300 from a GoFundMe campaign that “Kait the Great” started for her new friend, she and Aeric have repurchased all the needed landscaping equipment and fixed up a truck with a trailer that is sturdy enough to carry the gear. The plan is to reboot his business in Maryland at the start of the spring season.

While Aeric is still enrolled in a 90-day outpatient treatment program in Baltimore, he says that he has never felt more optimistic about his future – and it is all thanks to Kaitlyn and her purse.

“Everything about the situation was peculiar. Here was this homeless stranger, finding and returning my lost purse, doing a good deed–and wanting help getting into rehab as a thank you,” Kaitlyn told Good News Network.

“He said the purse materialized out of thin air in an alley while he was shooting dope, and I believe him because every day since I met him some positive revelation has happened that can’t be explained, other than being divine intervention,” she added in an email.

“Aeric is very spiritual and he has helped me find patience and peace as we’ve worked together through the challenges of recovery. He loved helping people before and, ironically, he’s now living at the very mission where he once volunteered and took classes. For me, this affirms that there’s a plan for each of us, and the door opens when your heart opens.”