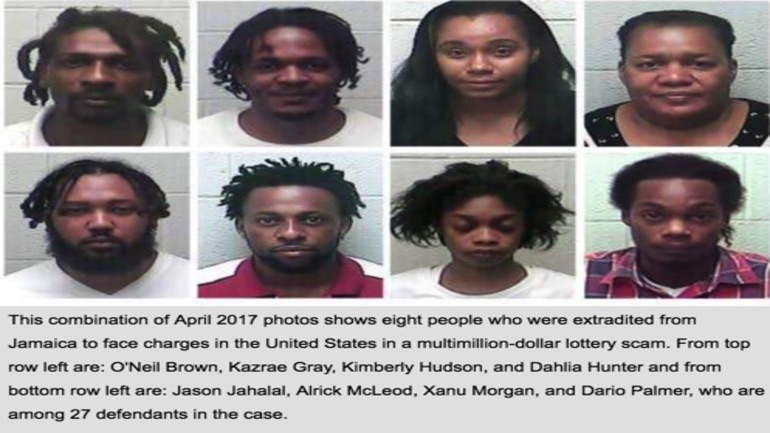 The Providence woman was the last of 27 defendants. The others all pleaded guilty or were convicted earlier in the scam that authorities say bilked at least 90 mostly elderly Americans out of more than US$5.7 million. Authorities identified victims in at least five states: North Dakota, South Dakota, South Carolina, Texas, and Arizona.

Authorities say scammers called victims about bogus lottery winnings, persuading them to send advance fees or so-called taxes to receive the purported winnings, then keeping the money without paying anything to the victims.

“When they (elderly) were vulnerable, Melinda Bulgin and these other co-conspirators preyed on them,” Assistant US Attorney Jonathan O’Konek told jurors.

The case is believed to be the first large-scale Jamaican lottery scam tried in US courts. It began in September 2011, when then-82-year-old Edna Schmeets, of Harvey, North Dakota, was scammed out of about US$400,000. During emotional testimony Thursday, she described cleaning out her life savings, borrowing money from family and borrowing from the bank, so that she could continue sending cheques.

“After that I was broke,” she said.

Bulgin was accused of collecting money and funneling it between the US and Jamaica via cheap flights she got through her job with an airline. She eventually was caught at a Jamaican airport in 2015 with nearly US$15,000 she hadn’t declared to customs officials.

Bauke testified she was duped by the scammers even though she had worked as a financial adviser and taught financial planning classes. She said she sent a total of US$25,000 to Bulgin and “did not receive one penny” in prize money.

Chapman told jurors that Bulgin’s identity could have easily been used by other suspects in the scam and that when she made admissions to authorities after her arrest in Jamaica she was “a young woman, scared, in a foreign country”.

“We cannot trust the evidence in this case,” he said.

The Federal Trade Commission estimates lottery scams could be a billion-dollar-a-year industry in Jamaica. The investigation into this scam began in 2012 and has involved the FBI, the US Postal Inspection Service, and the US Justice Department.

“I’m happy for the victims, that we can bring some justice to them,” Assistant US Attorney Clare Hochhalter said outside the courtroom.