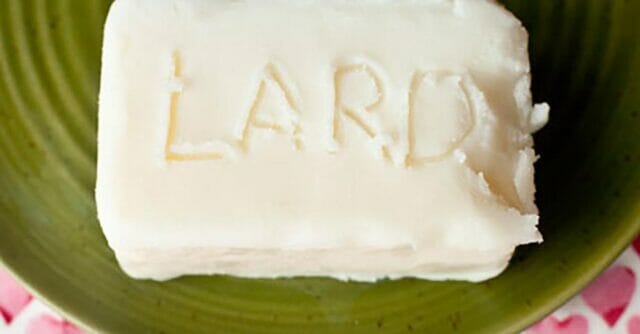 I guess you could call me a “lard ass.”

I’m far from fat, though. In fact, I’m the leanest, strongest and healthiest I’ve ever been.

Lard is fat rendered from the belly of a hog, strained into a container.

Once a staple in our grandparents’ houses, lard has been absent from kitchens across the country for the last half century. Only recently has this super-saturated cooking fat made a comeback, as people are starting to realize the health benefits of this almost-forgotten food.

Here’s why lard is making a comeback:

Lard is one of the best cooking oils because of its heat stability. Roughly 40% (possibly more in pasture-raised hogs supplemented with organic grain and coconuts) of lard is made up of saturated fats, which have single bonds between carbon molecules of the fatty acid chain.

Unlike monosaturated fats, which have a double bond between carbon molecules, single bonds are relatively hard to break.

Monosaturated fats make up roughly 50% of the fat in lard, while only 10%  is polyunsaturated fat – the most unstable because of the multiple layers of double bonds in the carbon chain.

The high amount of saturated fat in lard helps to protect the other fats from breaking down and oxidizing. When fats break down, they create free radicals, which cause cell damage.

Lard is also heart-heart healthy, regardless of what outdated food pyramids say. The “vegetable” — soy, corn and canola — oil industry has worked hard over the last century to convince us that saturated fat and cholesterol in lard lead to heart attacks.

Our great-great-grandparents consumed this wonderfully rich animal fat, along with butter and tallow (all grass-fed or pasture-raised at the time) and had very low rates of heart disease.

That’s probably because the saturated fat in lard increases HDL cholesterol, which is linked to a lower risk of heart disease. Cholesterol also aids the body in inflammation management and hormone production.

A meta-analysis of studies on lard conducted by the American Journal of Clinical Nutrition found no evidence that saturated fat consumption raises the risk of heart disease. The total sample size was quite large with 300,000 participants.

Not only is lard heart-friendly, but neutral in flavor. It can be used in just about anything that vegetable oil is used in.

One of my favorite things about lard is it’s high Vitamin D content.

Out of all the food sources for Vitamin D, lard ranks second. Cod Liver oil is number one and that stuff tastes so awful, it’s hard to consume regularly.

There’s 1000 IU’s in a tablespoon of lard. That’s way more than you’ll get from pasture-raised eggs or even grass-fed liver.

You have to make make sure the hogs are pasture-raised of course, if you really want to get the Vitamin D. Pigs must have the ability to synthesize the Vitamin D they get from the sun and store it in their fatty tissue. So they have to be outside.

Pasture-raised hogs are also more sustainable than their confined counterpart. They root around, fertilizing the ground while turning over the topsoil.

The best way to know if a hog is pasture-raised is to buy from a local farmer. It helps support local business and allows you to confirm where your food is coming from, but there are some great brands available online.

Pasture-raised hog fat is also a lot more sustainable than “vegetable” oil made from soy, corn and canola mon corps, which are destroying our topsoil and are loaded with pesticide and petroleum fertilizers.

The food-pyramid propaganda posted in your school cafeteria had it all wrong. Don’t let these ill-informed peddlers of poison steer you down the road of sickness and disease.

Go ahead and load up on lard! It’s for your own good.