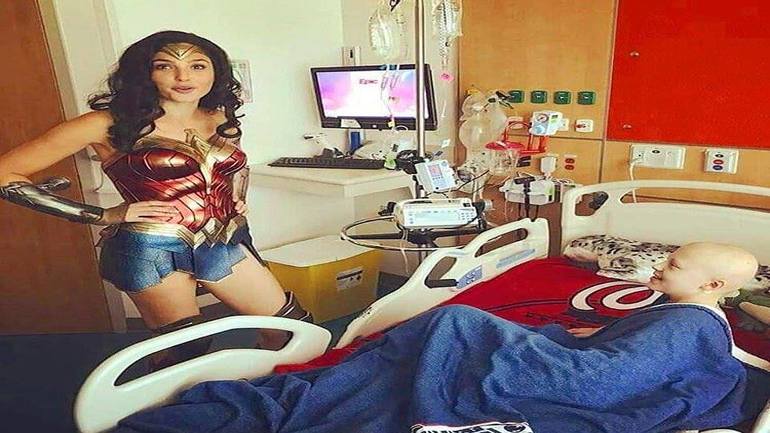 Gal Gadot is currently filming the highly anticipated Wonder Woman 1984 around parts of Virginia and in downtown Washington D.C., as the nation’s capital police traffic Twitter account slyly confirmed last month. Filming the sequel to the popular superhero movie is obviously being kept tightly under wraps. But on Friday, Gadot took a break from her hectic film schedule to brighten the lives of some ailing kids at the Inova Children’s Hospital in Falls Church, Virginia

And naturally, Gadot—a mother of two herself—surprised the kids in her full Wonder Woman garb, as you can see from the social media posts chronicling the visit.

Thank you ⁦@GalGadot⁩ for visiting us ⁦@InovaHealth⁩ Children’s Hospital. You are a true Wonder Woman. The kids loved it…and so did the staff ? #wonderwoman84 pic.twitter.com/EFDLM02rpf

Dear @GalGadot– Thank you SO MUCH for visiting my patients and colleagues at #InovaChildrensHospital! Next time, can you align your visit with my call schedule? Love, #SuperFan pic.twitter.com/kmE7CoFRvE

This is yet another example of Gadot continuing to be a hero onscreen and off. Last November, in the wake of accusations lobbed against Brett Ratner, whose production company RatPac-Dune Entertainment helped finance Wonder Woman—and who profited greatly from the film—Gadot said that would not participate in a sequel if the film producer was involved.

In total, six women, including Olivia Munn and Ellen Page, came forward as part of the #MeToo movement to allege that Ratner had sexually abused or harassed them. As a result, Warner Bros. has ended its co-financing deal with Ratner’s production company and kicked him to the curb, much to the relief of Gadot. “Everyone knew what was the right thing to do,” she said at the time.

Gadot has also kept busy by calling out Ryan Reynolds for pilfering Wonder Woman’s signature move and by advocating for the immigrant families who have been separated at the border to be reunited once again.