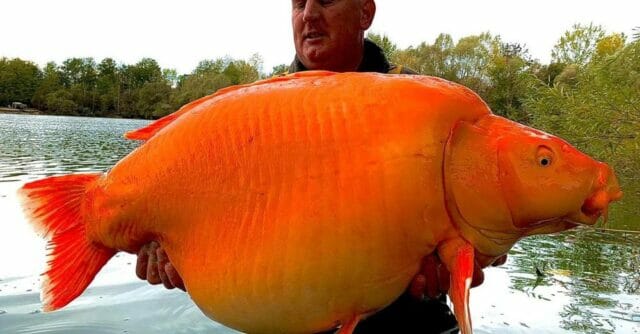 A UK fisherman became the envy of anglers everywhere after reeling in a nearly 70-pound monster goldfish — potentially the world’s largest. A Facebook post detailing the man’s catch of a lifetime is currently blowing up on Facebook.

Andy Hackett, 42, landed the behemoth, aptly nicknamed The Carrot, while fishing at Bluewater Lakes in Champagne, France, one of the world’s premier carp fisheries, the Daily Mail reported.

“I always knew The Carrot was in there but never thought I would catch it,” Hackett, a Worcestershire-based company director, said of the would-be Goldzilla.

Not a goldfish per se, the Fanta-colored freak of nature is actually a hybrid species of leather carp and koi carp, ornamental fish commonly found in ponds. This particular specimen, which is reportedly 20 years old, was apparently introduced to the lakes 15 years ago “as something different for the anglers to try to catch,” Blue Water Lakes spokesperson Jason Cowler told USA Today.