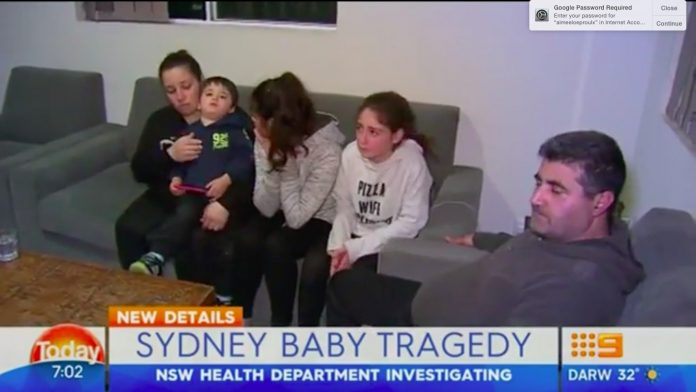 In July 2016, the Sydney family was celebrating the birth of their sweet newborn, John Ghanem. But it was short lived. After the New South Wales, Australia hospital staff accidentally gave the newborn nitrous oxide instead of oxygen, he passed away. We cannot imagine their grief.

Now, more than a year later, the family is being offered an interim payment by the NSW government. The reason it took so long? “Legal wranglings.” Instead of just paying them for their life-ending mistake, the parents- Sonya and Youssef Ghanem- were asked to “provide seven years of treatment records, three years of income tax records and other paperwork.”1 They were also asked to go for “psychiatric testing with a state-sanctioned professional” 2 before the state would pay ANY compensation.

Once the NSW Health Minister Brad Hazzard found out about the delays he demanded the local health district immediately make an interim payment. His spokeswoman said, “No family should have to suffer the passing of their baby and then be put through unreasonable legal hoops.”3 Another baby, Amelia Khan, was left with permanent brain damage in a similar mix-up at the same hospital in June 2016.

Sadly, this isn’t the first time this has happened. Another baby, Amelia Khan, was left with permanent brain damage because of the same mix-up, at the same hospital, in June of 2016.

An investigation into both incidents was carried out and it was determined that the mix-up happened because of “incorrect installations of gas pipelines, flawed testing and significant clinical and management failures.”4 I’d say.

However, thus far the government has not handled this very well at all. Hopefully, things from here on our will change, so these poor families can proceed with their lives.