The 53rd annual Grammy Awards was held on Sunday, February 13, 2011, at Staples Center in Los Angeles, California, in the United States. 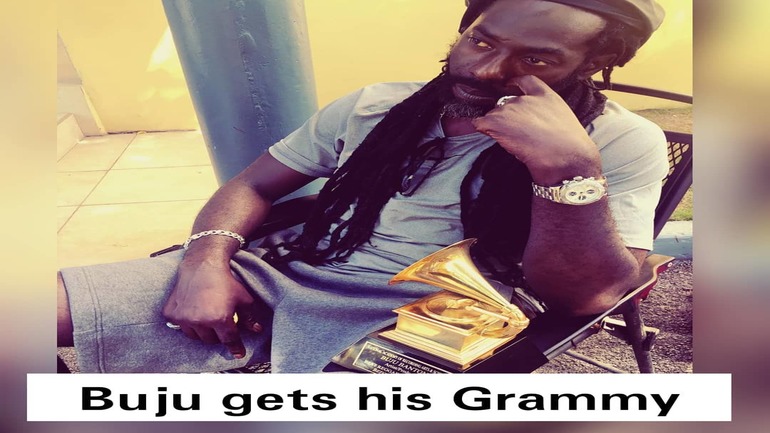 Meanwhile, at Los Angeles Convention Center next to the Staples Center, deejay Buju Banton was named winner of the Grammy for Best Reggae Album for his project Beyond the Dawn. The 10-track album was produced by the artiste’s own Gargamel Music label and released in September 2010. It was the singjay’s fifth Grammy nomination. His previous nominations were for Inna Heights (1999), Friends for Life (2004), Too Bad (2007) and 2010’s Rasta Got Soul.

At the time Buju Banton was deeply embroiled in his trial on drug trafficking charges, which was set to kick off the following morning at the Sam M Gibbons US Court in Tampa, Florida. He would subsequently be tried, found guilty and sentenced.

He returned home after serving the 10-year sentence in December of last year, but it was only a week ago that he was able to finally touch the Golden Gramophone he won on that February night eight years ago.

The task of guarding the award was put into the capable hands of his long-time business partner and confidante, Tracii McGregor. She took to social media immediately after delivering his trophy.

“I have held it in safekeeping all this time… opening the box on my darkest days… a simple reminder of all we accomplished… Finally, it is in the hands of its rightful owner,” she posted alongside a photo of the deejay with the trophy in his lap.

In an interview with the Jamaica Observer, McGregor said the artiste’s studio was her first stop once she arrived in Kingston last Sunday.

“(It was)… bittersweet. Then and now,” she remarked.

“Such a huge accomplishment. Well-deserved. A hard-won moment that was stolen from him, from us. Don’t get me started,” McGregor continued.

Since returning to Jamaica on December 7 last year Buju Banton has maintained a low profile. He is set to make his first local appearance at the kick-off for his Long Walk to Freedom tour at National Stadium in Kingston on March 16.

Chronixx, Etana, Coco Tea, Romain Virgo, Delly Ranx, Ghost, Agent Sasco and LUST are among the artistes who are billed to perform alongside the deejay on the show, as well as Buju Banton’s son Jahzeil.