Home DIY All It Took To Clean Up This Beach Was A Big Fish... 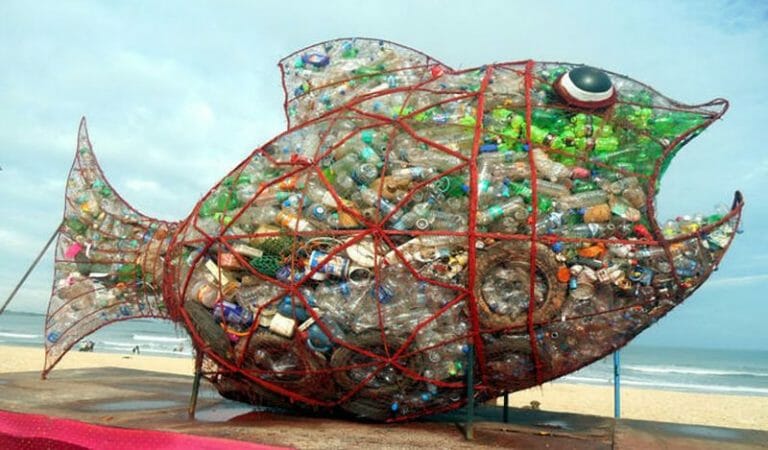 An image shared on social media of a creative sculpture on a beach in India, with a sign saying ‘Goby loves plastic, please feed him!’, has now been replicated in Bali, and the idea is catching on around the world.

There are stories on the internet about a fish named ‘Goby’ who loves to eat plastic trash. While this is a great concept, there are actually two different fish that are getting mixed up. In this article, you can find both stories in one which will hopefully inspire others to create similar projects on beaches everywhere.

Claims have been made that the ocean will be home to more plastic than fish by 2050 if nothing is done. If that is true, at least there is a new technology that has been rolled out that is currently cleaning up the oceans. Moreover, there are also some great stories about local recycling, like the following about Goby The Fish, Yoshi The Fish, and more.

Instead of just placing a ton of boring old garbage cans around the beach, they made a giant see-through fish and added a sign to it that said: “Goby loves plastic, please feed him.”

“We saw a similar installation on social media and begun researching it. We found out the fish was installed on a beach with a sign saying, ‘Goby loves plastic, please feed him!’, and we embraced the idea.” — Craig Seaward, General Manager of W Bali – Seminyak Source: WhatsNewsIndonesia.com

Regarding the photo of Goby and caption above, it’s possible Mr. Seaward was referring to the pictures of “Yoshi the Fish” on Malpe Beach (see below). Either way, the concept inspired him to replicate their very own recycling fish.

‘Fish That Swallowed Plastic Bottles’ Attracts Crowd At Malpe Beach, India It began with “Yoshi the Fish” (pictured) on Malpe Beach, Mangaluru, India. The sculpture was spotted on social media by management of a holiday resort in Bali, who thought it an excellent idea, and they replicated it on their site with a fish named “Goby”. Source: Mangalorean.com

Mangaluru, India, June 5, 2018: The caption might take you by surprise since it is not a real fish that has swallowed all that plastic, but a creative sculpture on Malpe Beach, near Udupi on the Arabian Sea in Karnataka, to raise awareness about the damage done by plastic materials to marine life.

This unique concept, named “Yoshi the Fish”, has been created by artist and sculptor Janardhan Havanje.

My question is, why is there not a Goby on every single beach in this world!?

This idea is certainly not limited to fish. Any abstract receptacle is sure to get people’s attention.