Home Global News Alabama Teen Photographed Walking At 5AM To Catch The Bus To His... 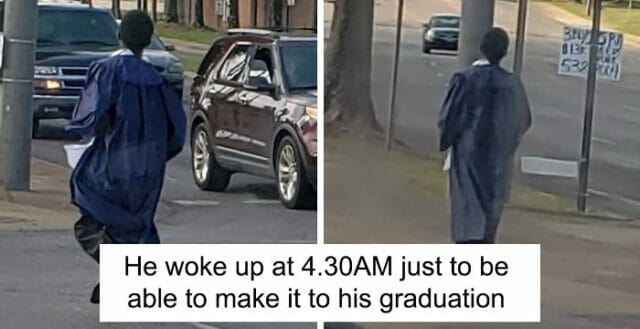 An automobile is given to an Alabama teen student who gained notoriety for wearing a cap and gown while strolling to his high school graduation. The student, Corey Patrick, was photographed by a bystander as he made his way to a Birmingham bus station to catch a bus to his graduation.

The family of a 19-year-old student who received his diploma from Tarrant High School does not own a car. To get to school, Corey used to get up around 4:30 in the morning. Just before his senior year, his family moved to the West End area, which is only 10 miles from his school but takes around 90 minutes to get to through public transportation.
Corey opted to go for daily morning walks because he wanted to finish his senior year with his pals. I have to take the steps that were necessary for me to walk this year,

Corey said WBRC. The other family members eventually made plans to get at the school in time for his graduation, according to his mother Felicia White. Local radio broadcaster Rickey Smiley pleaded with his fans to assist him in finding Corey after the image of the missing person became viral on social media. Then, as a thank you for his dedication and perseverance, Rickey gave Corey and his family a brand-new automobile. He’s a wonderful young man, Corey’s mother remarked. I’m proud of Corey because he is a very obedient child who is quiet, reserved, humble, and occasionally a little hard-headed. For the past year, Corey had to get up at 4:30 in the morning.