Even more harrowing is seeing such rogue cops get away with zero or little punishment as if Black lives don’t matter.

But it has been good news for the African-American community when police officer, Matthew Johns was handed a 20-year sentence this week after he was indicted on eight felonies for beating 15-year-old Antraveious Payne in 2018.

Johns was indicted on eight felonies, including four counts of aggravated assault, two counts of violation of oath by an officer and two counts of giving a false statement for repeatedly kicking and choking a 15-year-old boy until he was unconscious and then lying about it. 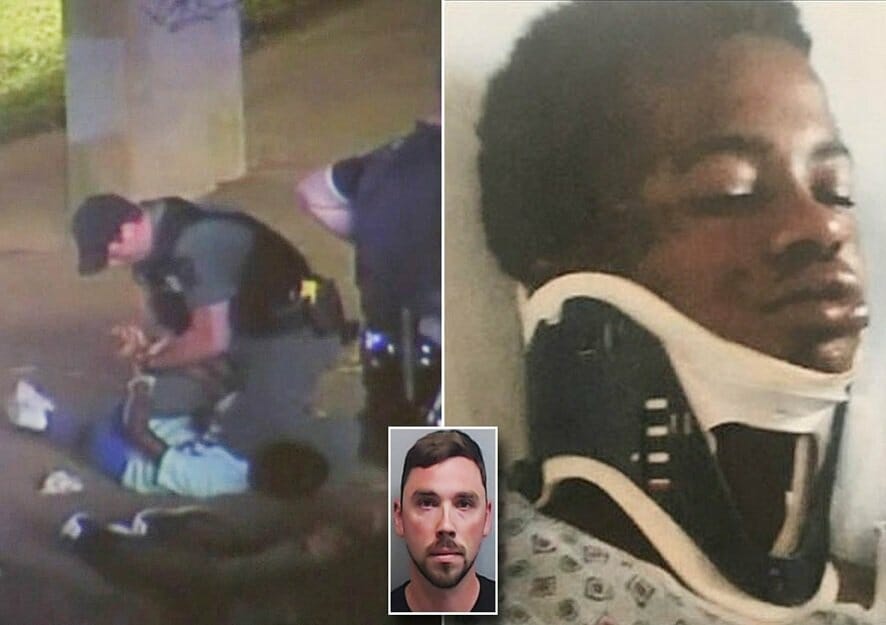 Johns pleaded guilty on July 10 and was sentenced on Monday to 20 years with five to serve in prison in connection with the 2016 incident reports TFTP.

Nevertheless, Johns still beat the hell out of him until the teen fell unconscious. Payne was beaten so badly by Johns that he was hospitalized with a concussion and suffered multiple lacerations to his face.

According to the report, after the incident, Johns was placed on administrative leave and no action was taken until a new police chief took office and reopened the case.

Johns was then fired. However, for beating a compliant suspect for no reason, he faced no criminal charges—until more than a year later.

A lawsuit by Payne or his family is likely to emerge which could cost the taxpayers of Atlanta despite Payne breaching the law by riding in a stolen vehicle because of Johns’ excessive use of force.

Disturbing dashcam footage revealed Johns beating the Atlanta teenager even when he offered no resistance, but what made the police officer’s case even bizarre is that Matthew had road crash with his cruiser a few weeks prior and was barred from driving, but managed to check out a vehicle and used it to ram another car, then beat the teen and lied about the entire ordeal.

Prosecutors, using the video of the incident, agreed, noting that Payne got out of the car and laid on the ground with his hands up, showing he did not have a weapon and was willing to surrender watch the video below.